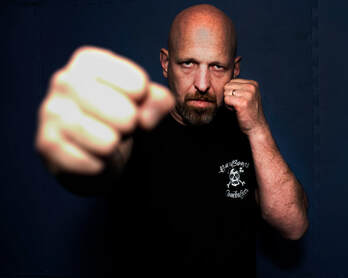 My name is Jim Armstrong, and I’ve been trying to write this bio for bloody ages! I’m in my 50’s and have been married for 26 years. My wife and I have one teenage son. Yes, that’s right, we were married for quite a while before deciding to have a child, we’re smart like that : ) I live on the not so mean streets of Glen Waverley and have practically done so since I immigrated to Australia in 93…yes 1993 not 1893! I'm originally from Newcastle upon Tyne in the UK which makes me a proud Geordie... you may have to Google that.

Life in Newcastle was very different to Australia. No animals trying to kill you for one! Well, that’s not 100% true as Newcastle in the 70’s, 80’s, and 90’s was a violent place. I was accustomed to violence and fighting from a very young age, but after witnessing a fight between two guys and a group of attackers my understanding of violence changed. I realized I needed to study martial arts to develop the skills to fight multiple attackers. I suffered this delusion for quite some time. Fortunately, moving to Australia, getting married, and becoming a father helped change both my mind and reasons for training. It was still a long time coming, but from around 2006 onwards I changed how and why I did things. I realised I was missing the point. It’s got nothing to do with becoming the ultimate fighter, it’s all about becoming the ultimate you, or as close as you can get : )

I’ve been training in the martial arts for around 35 years and teaching for over 30. I have trained and taught in many styles and systems from Kung Fu to Karate, Eskrima/Arnis to Kickboxing, Jeet Kune Do to Thai Boxing, and Combatives to Self Protection. Around 13 years ago I put everything I thought I knew onto a shelf, a virtual shelf not a real one, and looked at everything with fresh eyes. This led me to a deeper understanding of how the mind and body work together. What I now teach is certainly not the norm, and I’m very proud of that. This has allowed me to teach my understanding of Martial Arts and Self Protection to many people and countries outside Australia, including New Zealand, Dubai, UK, Ireland, Germany, Finland, Belgium, and Indonesia. I have also been fortunate enough to publish many articles with Blitz Martial Arts magazine. I was even lucky enough to appear on the front cover and still have several copies if anyone wants a signed copy or three… : )

As usual, I have digressed! In November 2019 I decided to open a full time training center. For the previous 20 years I had taught and trained out of my garage. I will miss The Garage as there were many great memories made there. We even hosted some of the world's top martial artists, which was pretty cool! Luckily for me my long time training partner and friend, Jezz, decided to partner me for the next stage of my journey. To say we’re excited is an understatement! I honestly couldn’t think of a better person to share this with. We are both very different, with very different personal experiences and backgrounds, but our message is exactly the same. Get out there, make a difference while helping as many people as we can.